IPython is an enhanced Python shell, the shell being the prompt which appears when you start python command in your terminal. IPython comes with notebook flavour, where IPython Notebook presents the modern HTML-based shell for Python.

5. Running IPython Notebook on your server

Python is so-called dynamic programming language where much can be achieved by piloting your code in an interactive interpreter or tuning your production server from the shell. Basing the read-evaluate-print-loop (REPL) to web browser technology, instead of terminal technology, brings shell usability to the modern age, boosting your working efficiency considerably.

IPython notebook, as being based on HTML, can also output graphics and dynamic clickable and navigable graphics. For graphics, diagrams and plotting, check out Bokeh and Pandas libraries.

First create a virtualenv. Then continue in the activated virtualenv.

Developers like their terminals either white-on-black or black-on-white. Try switching the color scheme:

Now comes the big one. Start IPython notebook for a web browser based shells:

This will start IPython kernel running in the port localhost:8888 and automatically connects your default web browser into it.

Yay! Finally you can

First, you need to a have running Django project. If you are new to Django I highly recommend reading DjangoGirls’s Django tutorial – one of the best tutorials to modern web development covering HTTP, Python, databases, HTML, CSS and JavaScript.

Install Django Extensions package. Django Extensions, with many other features, gives you the ability to automatically import all of your application models on the start up to have quicker access to them. We do the example below using DjangoGirls website checkout.

And you can straight away play with your Django models: 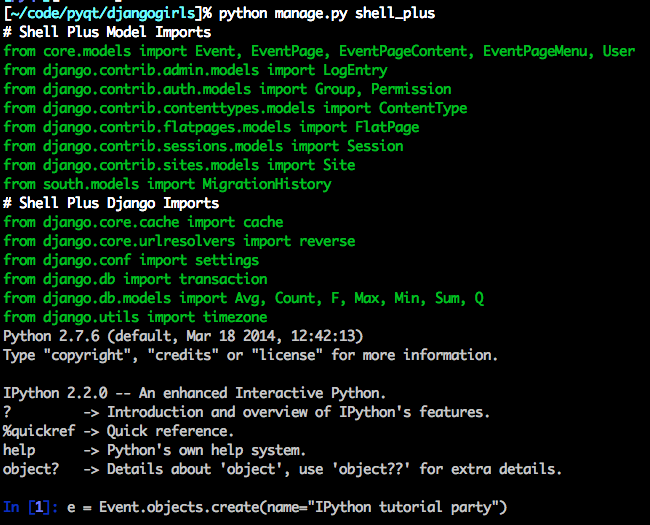 … and you get the same, but with all IPython Notebook goodies:

5. Running IPython Notebook on your server

If you want to run IPython Notebook on a non-local computer you can use SSH tunnels. Please first read SSH basics for developers, then proceed to how to build SSH tunnels for port forwarding.