As mentioned in the introduction, this tutorial is based on an consulting job to mobilize a centralized user authentication system. To be exact, the system is Shibboleth federation login used by various public sector institutions. The authentication system allows users to cross-authenticate themselves across organizational borders: erg. students from a university can join to wi-fi in another universities using their existing home university logins and so on.

This is how the landing page looked on mobile devices before any mobilization work: 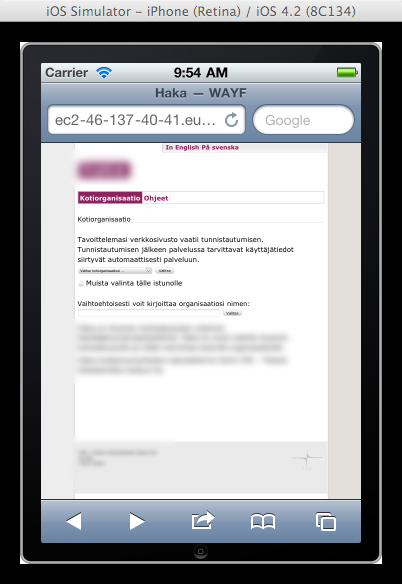 1. Applying a hint of responsiveness on an existing layout

Responsive design (a.k.a reactive layout) is a technique where the same HTML payload is adapted to different screen sizes using CSS3 media queries and optionally client side Javascripting. It is an alternative for building a separate mobile site or page.

To have the basic mobile functionality, a responsive design layout needs to have at least two distinct layout steps. The steps could be:

The site we mobilized in the tutorial project was a landing page with few form elements. The design was simple: applying layout changes to achieve responsive layout was possible. However, usually migrating to responsive design techniques require designing the site layout and theme from the grounds up using mobile first approach. This is because legacy designs seldom have respected HTML philosophy and they take it granted that there is only one screen size and only one way of displaying information. Converting this kind of legacy layout to be responsive is challenging.

When dealing with legacy codebases running in production “minimal changes” principle applies; If a system has been in production use several years, not actively maintained, every change in the codebase comes with a risk of potentially breaking something. Thus, when mobilizing a legacy website you may try to leave the existing HTML and CSS  mostly untouched using the following strategy

Naturally, this all apply only when you are mobilizing using responsive layout. There exist other mobilizing strategies too.

This will decrease the amount of unnecessary code loaded on mobile devices making the pages load faster.