Skype is the most popular IM client with over 200 million monthly users. It’s easy and reliable: anyone can use it anywhere, even on mobile. When you are working with virtual teams, Skype group chats become vital tool of communication.

Skype lacks good built-in support for external service messages, or robots, sending and receiving automated messages. Sevabot, a friendly Skypebot, addresses this situation by allowing you to script Skype easily, and even remotely, over simple HTTP interface and with any UNIX scripting language. You can even send Skype messages to your group chat directly from a web browser Javascript.

Sevabot is geared to be an AI support person for a virtual development and operations teams. 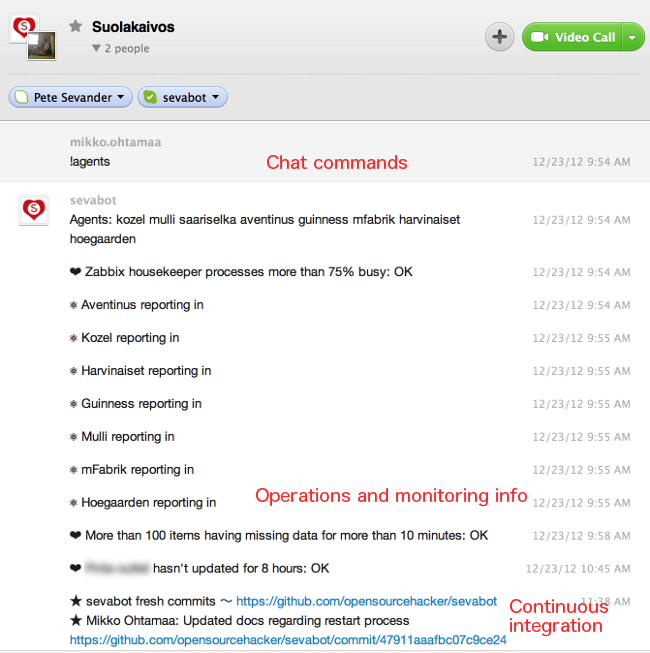 The scope of Sevabot does not need to be limited to software development: You could, e.g., make Sevabot interact with Google Docs or Salesforce.

Sevabot can be run on Linux server, Linux desktop and OSX desktop. Due to how Skype is built you need to run a Skype GUI client inside a virtual X server to deploy Skype on a production server. Vagrant automatized server configuration is supported for automatically creating and deploying a virtual machine running Sevabot.

Sevabot can be run Windows, in theory, but the authors have not had inspiration to explore this cunning option.

Sevabot is written in Python. Scripting Sevabot does not, however, need Python knowledge as

You can even script Sevabot without programming knowledge, as there exist HTTP webhook middleman services like Zapier, which allow you to connect event sources (e..g Github API) and sinks (Sevabot HTTP interface).

Here is a simple example how to send a message to a Skype chat from a Bash shell script. It’s a Subversion post-commit hook which displays the commit message in a specific Skype group chat (full example):

This blog post is a short explanation how to give and consume environment variables in your (Python) code. It’s a nice little trick, but if you are not well-versed in UNIX systems you might not know it.

An application can be configured usually in three ways. Through

The two first ones are the most well-known methods. However, the last option is the easiest for quick and dirty hacks.

Note: Environment variables work alike in UNIX and Windows. However, I have no longer valid experience about Windows and how to set environment variables in the latest cmd.exe incarnations. (I used to write AUTOEXEC.bats for DOS, but that’s like long time ago). So if there are Windows gurus around please leave a comment.

Whether and how using environment variables is a good practice is debatable. But it definitely saves your butt when you need to make something quick and dirty.

You can give environment variables to your application on UNIX command line by simply prefixing your command with them (bash, sh, etc. shells):

Then you can read out for this environment variable easily using os.environ dictionary (pseudo code)

If you are using Python as the configuration language of your application (Django’s settings.py, Pyramid’s Configurator) you can also use this trick there to make some settings conditional which you normally hardcode in Python. Example settings.py:

Then, on the staging server, you would launch your Django application as

You can also give several environment variables once:

This is a way to bind certain settings to certain computers in your Python code by checking the name of the computer as returned by gethostname() call. This is useful if you don’t want to forget giving a specific launcher command on a specific server.

The only downside is that sometimes the hostname is not stable: I have noticed this behavior on OSX when connecting different networks on my laptop and apparently the name is given by the network.

Often you want to automatize something using shell scripting. In a perfect world your script robot works for you without getting tired, without hick-ups, and you can just sit at the front of your desk and sip coffee. 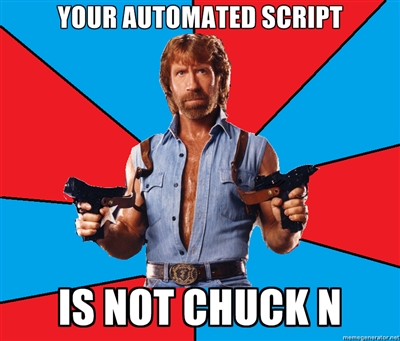 Then we enter the real world: Your network is disconnected. DNS goes downs. Your HTTP hooks and downloads stall. Interprocess communication hangs. Effectively this means that even if your script is running correctly from the point of operating system it won’t finish its work before you finish your cup of coffee.

Below is an example how to create timeouts and notifications in a shell script.

1. Never gonna give you up

Automation must work 100% and you must always know if it doesn’t do that. Otherwise if you cannot trust the automated systems you could have this glorious moment of “oh it has been broken for three months now”. No amount of coffee makes your day after that. Then you spend your nights pondering whether your scripting is running instead of playing Borderlands 2.

Some safety guards around your coffee cup include

The shell scripting (sh, zsh, bash)  does not offer built-in tools for timeouting commands by default (please correct me if I am wrong, but stackoverflow.com et. al folks did not know any better). In Bash cookbook, there exist a timeout wrapper script example (The orignal SO.com answer).

The trick is that when the timeout wrapper terminates the command, you’ll get the exit code of SIGTERM (143) or SIGKILL (137) to the parent script. This might not be entirely clear from reading the script.

Below is an example how you can hook timeout to your own script. Here we have a simple continous integration script (ghetto-ci) which polls version control repositories and on any change executes the test suite. A test failure is reported back to Skype by ghetto-ci using Sevabot Skype bot. The loop script uses a server specific (Ubuntu) way to set up a headless X server, so that the tests can run Firefox on the server (can one call a headless Firefox server “mittens”?) The continous integration loop is deployed simply as leaving it running on the screen‘ed terminal on a server.

Some protection we do: The script has extra checks to protect against hung processes by killing them using pkill before starting each test run. Selenium’s WebDriver seem to often cause situations where the Python tests don’t quit cleanly, leaving around all kind of zombie processes. In this case, the test command timeouts using the timeout wrapper and we get a notification to Skype. Based on this we can refine the test running logic, timeout delay and such to make the script more robust allowing us to focus more on drinking the coffee and less watching a looping process running in a UNIX screen for potential failures.

Pardon me for possibly ugly shell scripting code. SH is not my primary language. The example code is also on Github. Please see the orignal blog post for syntax colored example.

Voila. Back to the coffee.

psutil is a Python library and API for UNIX system administration utilities. It provides Pythonic API e.g. for top, lsof, netstat and kill like tasks.

The benefits of using this library include

psutil is maintained by Giampaolo Rodola and Jay Loden.

Below is a short example what you can do with psutil. It checks if the current operating system is running Apache (web server) process and this process is listening to particular TCP/IP ports. The use case could be e.g. per-requirements check that the software can be deployed against a particular system.

Note: When installing psutil be sure that you follow the Python best practices: sudo-free virtualenv installation.